“Service is the rent I pay to occupy my space on earth and I want to be a good tenant!”
– 5040 district governor inspired by quote from Rotary International president Mehta 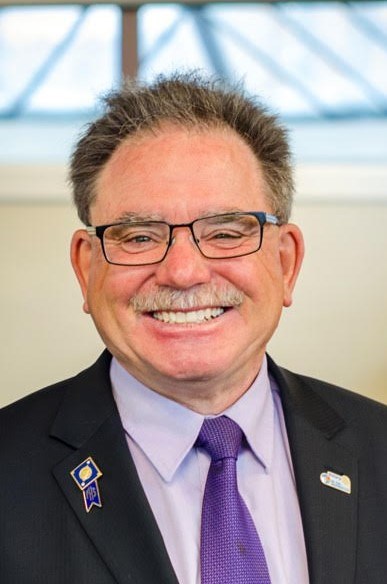 Lorne Calder had a plan for his own retirement when he called it a career after 28 ½ years as an executive with Integris Credit Union.

On May 31, he packed up his desk, said goodbye to his colleagues, and shut the door to the office he occupied since 2014 as chief financial and risk officer at Integris.

But if you thought he went home to park himself in front of a TV sitting in his rocker  to contemplate what he intends to do with all that extra free time on his hands, you obviously don’t know much about Calder’s volunteer spirit and desire to make this world a better place.

He’s as busy as he ever was during his working days now that he’s assumed his duties for the next year as governor for the Rotary International’s 5040 district. Calder was named to the position in December and began his one-year term on July 1.

“This is pretty much a full-time volunteer role,” said Calder. “My role is to co-ordinate or be part of the district’s committee structures and boards but I also  will go to visit 49 Rotary clubs and 12 Rotaract clubs and  hopefully as many Interact clubs as possible. It’s a lot of stuff that goes to try and  inspire and encourage  growth in Rotary. We always believe that more hands make work much lighter.”

As a member of the Downtown Rotary Club, Calder is only the third Prince George Rotarian to hold the position, following in the tracks of Neil King (1998-99) and Ron Neukomm,(2004-05) both from the Nechako Rotary Club. Del Paterson held the position in 2001-02 after he moved to New Westminster from the Prince George Downtown Club, followed by former Downtown member Art Erasmus, who became district governor in 2002-03 as a member of the Terrace club.

Calder is a former president of the Rotary Club of Prince George and was Rotarian of the Year in 1997 and 2011, the year he was nominated for the city’s Citizen of the Year Award. He served nine years as district director of the BC Chamber of Commerce and is a former president of the Prince George Chamber of Commerce (1999-2000). He was Rotary’s assistant district governor for three years,  which helped him learn what’s expected now that he’s the 5040 governor.

The 5040 district extends from Prince George west to Prince Rupert and south to through the Lower Mainland to Vancouver, Whistler and the Sunshine Coast. The district has  49 Rotary Clubs, 12 Rotaract clubs (for members aged 19-30) and 33 Interact clubs (13-19).

“It’s a big area and we’re the only district of the six in the province that has its clubs all housed in B.C., so we don’t have border issues,” said Calder.

In his 27 years as a Rotarian, the 65-year-old Calder has seen many community projects completed as a result of the fundraising/organizing efforts of his service club colleagues. The collaborative efforts of the three Rotary Clubs in the city – Downtown, Yellowhead and Nechako – have built community playgrounds, the Rotary Soccer Fields, two skate parks and the Rotary Hospice House.

Despite the challenges of the pandemic,, Calder says the 5040 Rotarians raised $1.3 million for various causes in 2020-21. Other service clubs in the city have had trouble maintaining membership and many have folded but Rotary maintains a strong presence in Prince George. The Downtown club has 38-40 members, Nechako has 32-35 and Yellowhead has 40-45. They combine for about 120 members who will help host the Rotary district conference in Prince George, May 20-22, 2022. His first roadtrip as district governor will be to visit Prince Rupert Rotary Club, which was founded 100 years ago as the third Rotary club in B.C.

“In Prince George , specifically, we have a couple signature projects and signature fundraisers and because of that there’s a bit more knowledge of what Rotary stands for with the soccer fields, the Hospice House and the skateboard park,” said Calder.

“In the pandemic, the social aspect went away and some clubs are trying to find a way to get back to the post-pandemic era and start to meet and greet again. The vibe’s different. I went to a couple face-to-face meetings in Vancouver and here and people have been missing contact with other people and having conversations and sharing their stories. It’s a vibe you can’t live without, and yet we did really good this year.”

Calder has always lived up to the mission of Rotary to provide service to others, promote integrity and advance world understanding, goodwill and peace through its fellowship of business, professional, and community leaders. It’s his commitment to those values that keeps him coming back for more.

“Watching us eradicate polio, the whole water-, food-supply systems, schools, healthcare and that type of stuff in many of the developing countries. Rotary was actually one of the  non-government organizations that founded the United Nations 75 years ago, so we’re very proud of that.

“We’re still active members at UNESCO and still active participants with UNICEF and with world health organizations and people don’t know that,  even at the local Rotary level, that there is a greater impact out there. It’s amazing with the lives we’ve changed and how we make an impact in the world. ”

Calder is inspired  by the Rotary International’s new president, Shekhar Mehta, a native of India and his quote and subscribes the a similar philosophy:  “Service is the rent I pay to occupy my space on earth and I want to be a good tenant.”